Fortaleza (translation – fort) is the capital of the federal state of Ceara that is located on the north east of Brazil and is the fifth largest in that South American country. It’s the most popular tourist destination of Brazilians. 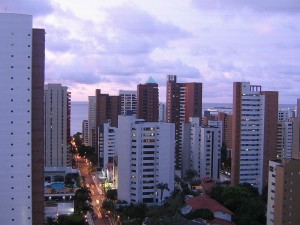 The city has several hotels with five stars and some with four. New records are expected when it comes to the number of tourist and income in 2014, not only because of the World Cup in football but also because of the Miss Universe competition. Driving in Fortaleza has its own laws.

Also, there are beaches 25 kilometers long (Irasema, Meirelep, Mukurioe and Praia do Futuro), and each one of them has it’s special characteristics.

It was discovered by the Spanish man Vicente Pinson, it was colonized by the Portuguese, and it was occupied by the Dutch, Fortaleza was founded on the 13th of April 1726. During the 19th century the city developed into the urban center of Ceara.

With the development of the cotton industry, in the middle of the 19 century, Fortaleza gets a economic and infrastructure growth. Some of the most important educational institutions have been built in that period, as well as the city traffic network and the beginning of the railroad. During the 20th century a large increase of peasants was noted, and the first 100.000 residents Fortaleza achieved by polling the cities Masegane and Parangabe.

The weather in Fortaleza is unique. Rain falls usually during the first six months of the year and then the humidity of the air is very high. In the other half there is almost no rain, the warmest weather is in December with an average temperature of 31 degrees.

Located on the north east of Brazil on the shore of the Atlantic Ocean, Ceara is the eighth federal state according to number of residents and 17th by surface in Brazil, as well as one of the most popular tourist destinations.

Literally, Ceara means the song of the Aratinga (a type of parrot) and one of the most important Brazilian authors Jose de Alencar says that Ceara means turquoise or green water.

Although it has mountains and valleys where tropic fruit is grown, Ceara is most well known for the expensive shore 600 kilometers long which makes it one of the most favored tourist locations. It is one of three north eastern Brazilian states that, only in the world, produce plant wax that grows only in that part of the world.

Traditionally a farm land, the industrial development of Ceara began in the sixties, seventies and eighties during the military regime, and is growing year to year. According to a poll in 2008, there are 8.472.000 people living in this state, the largest number comes from racially mixed marriages (63,39%).

Iguatemi Mall is builded for your fun and leisure and it’s the biggest shopping mall in the city of Fortaleza. In it you can find more than 300 shops that bring together the most comprehensive mix of shopping and leisure with over of 90 thousand square meters.

Football in the city

Fortaleza is represented by three clubs in football – Ceara, Fortaleza and Ferroviario.

Ceara is the club with the longest tradition in the norther part of Brazil. It was founded in June 1914 under the name Rio Franco and this year it celebrates the 100th anniversary of existence. Ceara has won the state championship 43 times, and is currently competing in the Series B.

Ceara got it’s greatest rival in the form of Fortaleza, and red, blue and white were the colors that crowned their jersey. Fortaleza is currently competing in the Series C.

The two largest city rivals played 511 matches together on the state championship from which Ceara won 174, Fortaleza 156, while the score was even 176 times.

Ferroviario was founded by humble workers of the railroad department in 1933. Ferroviario in Portuguese means railroad worker. The club then represented the sports expression of Brazil’s workers, and it was the symbol of democratization of national football.
Ceara
State titles – 43 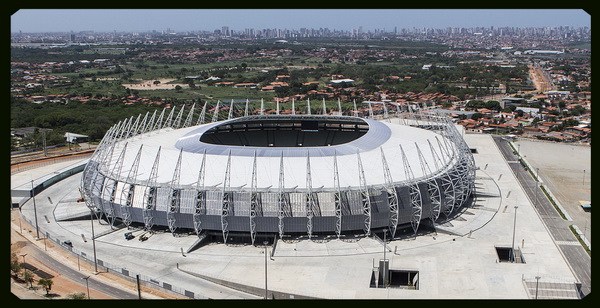 The Arena Castelao with a capacity of 58.704 seats is the fifth largest stadium in Brazil and the 27th in the world. It was built with the initiative of the governor of the state Ceara Placida Castela by which it was named.

It was opened on the 11th of November 1973, when a game between the local clubs Ceara and Fortaleza was played. Earlier this sports object could take up to 70.000 viewers, but in 1980 the capacity was expanded, so a match that was played by Uruguay and Brazil in that year was watched by a record 118.000 viewers.

In 2002 the first roof was built and the capacity was reduced to 60.000, and from then on it was renovated again. The distance between the fans from the field was reduced from 40 to 10 meters, air circulation was enabled and heat insulation was built. Access was also improved, the number of bus stations and metro stations was increased.

The Arena Castelao was the host of the Confederate Cup in 2013 so the renovation was finished on the 16th of December 2012, which is the earliest out of any cities in Brazil.

The owner of this object is the government of Ceara, and for a complete reconstruction 250 million dollars were invested.

Fortaleza is known as the birthplace of many artists, writers, as well as composers. The most famous one is the writer Gustavo Barroso, who worked as a journalist, and is linked with the political movement of Brazilian Integralism. Today in Fortaleza there is a museum named after him.

Fortaleza is the birthplace of the Archbishop Helder Camara who was nominated for the Nobel Peace Prize in 1973. Also, the writer Rakel de Keiroz was born, who became the first women to be a member of the Brazilian literary academy.

A football master born in Fortaleza is Mario Jardel. “Super Mario” began his career in the club Vasco da Gama, but got the title of a legend in Gremio. He gained wider popularity playing in Europe, for Porto, Sporting and Galatasaray. In the period between 1998 and 2001 he was the best scorer in Europe, he made 125 goals in 130 games. Mario Jardel is a two time winner of the Golden Boot. He had incredibly skills, he had an amazing sense for a goal, but he played only ten matches for the Brazilian team and achieved only one goal.

Currently, the most famous players born in Fortaleza are the brothers Roni and Rafel, playing in the German Bundesliga. The older one defends the colors of Borusia Menhengladbah, and Roni plays in Herta.